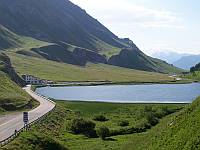 The Maddalena Pass – known as Col de Larche in France – is located on the border between France and Italy. It lies between the Cottian Alps and the Maritime Alps and connects Barcelonnette in France with Cuneo in Italy. Its French name refers to the village Larche on its northwestern side. Under its earlier name, Col de l’Argentière it has historically linked Lyon with Italy; the Col de l’Argentière was in the possession of the house of Savoy from 1388 to 1713, offering an easy route between Piedmont and its outlying valley of Barcelonnette, which came into Savoyard possession in 1388, when Amadeus VI of Savoy purchased it for its strategic and commercial importance. A few hundred metres from the pass, on the Italian side, is the Lago della Maddalena, which is the source of the Stura di Demonte, an important tributary of the Tanaro.