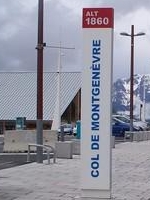 Route National 94 takes you over this col from Briancon in France to Cesana Torinese in Italy. As it’s an important cross border route it’s open all year round and the road is good, and relatively interesting too. From a motorcycling perspective though it suffers from the volume of traffic using it and overtaking can be an issue.

On the Italian side it’s a short ride to the Frejus tunnel which takes you back into France and at the top there is an obelisk celebrating Napoleon Bonaparte. It was erected in September 1804, two months before the First Consul had himself promoted and crowned as emperor.