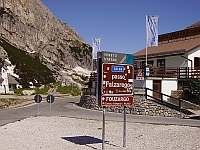 This was the 3rd pass in our 18 passes in a day ride – preceded by Passo di Valparola and followed by Passo di Giau. Leaving Arabba, the road to Cortina winds gently along the side of the valley until you reach Andraz where the climb up the Falzarego starts. The name Falzarego means “false king” and refers to the legend of the King of the Fanes who was turned to stone for betraying his people. The surface on the ascent is good albeit not that grippy. As a main route it’s typically wide and reasonably open. At the top the Valparola joins it from the north. There are excellent views in both directions and a cable car runs up the Lagazuoi, the scene of fierce fighting between the Italians and Austrians in WWI. On the descent the road surface was often poor with a lot of distortion but on the whole still enjoyable. Near Pocol on the descent there is a right turn to the Giau.