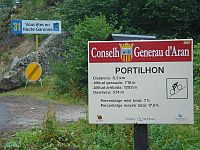 The Col du Portillon (or Puerto del Portillon) is located in the Val d’Aran, a Spanish valley that borders France and connects the French town of Bagneres-de-Luchon in the north with the Spanish town of Bossost in the south. The ride from from France to Spain is best as the well surfaced route up the French side is tight and steep while the equally well surfaced route down the Spanish side is fast and flowing. If you find yourself in Bagneres-de-Luchon with an hour or so to kill we suggest you head up and over the Portillon. From Bossost pick up the N230 which will take you back to France. Once back in France pick up the N125 and follow signs to Saint-Beat. From Saint-Beat it’s a short 12 mile blast along the D44/D125 back to Bagneres-de-Luchon. Take your passport just in case. There’s not much to see at the summit, but on the very fast descent to Bossost in Spain there is a superb view of the valley below. Check out the waterfalls on the way up from Bagneres-de-Luchon.