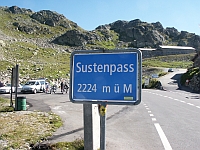 The road from Andermatt to Wassen takes you past Schollenen Gorge. Enclosed by sheer granite walls, its road and railway require several spectacular bridges and tunnels, of which the most famous is a stone bridge known as the Teufelsbrücke – Devil’s Bridge. The story goes that in return for the Devil building the bridge the villagers agreed that he could have the soul of the first person to cross it. The villagers fooled the Devil by sending across a goat.