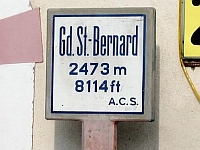 Rising to 2,473m this is the oldest pass through the Western Alps, with evidence of use as far back as the Bronze Age, surviving traces of the Roman road and more recently the path of Napoleon’s army into Italy in 1800. A hospice for travellers was founded in 1049 and named after St. Bernard of Menthon. It later became famous for its St. Bernard dogs. The hospice still functions, occupying two buildings, of 1560 and 1898. Pope Pius XI confirmed Bernard as patron saint of the Alps in 1923.

This pass is a firm favourite of ours and it runs northeast-southwest through the Valais Alps. From Switzerland in the north the route to the pass follows the Dranse River valley above Martigny, then into the wild and desolate valley of the Dranse d’Entremont. The Great St. Bernard Tunnel – and the main road – plunges through the mountains at the 1,915m level; after the construction of the Simplon Tunnel further east in 1905, railroad traffic partly superseded the St. Bernard road. The much smaller historic road winding over the pass itself, which is part of the Swiss border with Italy is only passable during June to September.

On the south side of the pass, the Great St. Bernard Valley is drained by the Artanavaz River, which runs down to Aosta. Just below the pass, straddling the pass itself, is a small lake and several buildings making up the hospice. The old road may still be seen above the paved road and the minor peaks Mont Mort and Pointe de Drone flank the pass. The elevation is such that snow may keep the pass closed until June, and indeed the motivation for the hospice was to aid travellers overcome by the difficulties of the crossing.