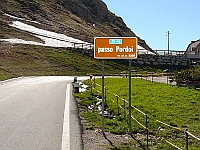 This was the 16th pass in our 18 passes in a day ride – preceded by Passo di Fedaia and followed by Passo di Sella. Climbing up from Arabba the first thing you see is a sign saying “32 Tornanti”. A “tornanti” is a hairpin so you know what’s in store for you. However, compared say to the Passo dello Stelvio, the hairpins are on the whole reasonably wide. Even so, it’s difficult to get much of a flow going on either the way up or the way down to the Sella. Apparently if you like Marmot spotting this is a great pass to visit in July/August to hear them whistling to each other.