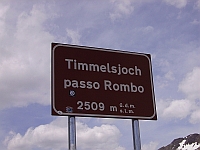 We only rode north to the summit from the Sankt Leonhard end so we can’t comment on the Austrian side down to Solden, but even riding just half the pass was a memorable experience. The pass has existed for centuries but for motorised traffic the road on the Italian side only opened in 1959. Mussolini had started building the road for military use in the 1930s from Moos upwards but following a meeting with Hitler in 1939 construction work ceased. Why Hitler was bothered about the Italians is beyond us but anyway work on joining up the road on the Austrian side with what had become a rough track used only for forestry purposes recommenced in 1955 and was completed in 1959. The road up is quite dramatic as early on after Moos you take a bend and suddenly see the pass climbing steeply up the other side of the valley. Towards the summit you pass through a tunnel and then have the final 2km run to the summit. Make sure your brakes are in good working order before you descend as the drops are massive!