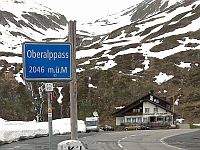 The Oberalp links Andermatt with Disentis and the pass starts immediately you leave Andermatt, next to the cog railway. The road then follows the railway fairly closely until you reach Disentis. It’s a fantastic biking road that’s very well surfaced with wide sweepers. The river on the right of the road is the Vorderrhein – one of the two main tributaries of the River Rhine – the source is at the Tomasee – a small lake off the road to the right near Piz Badus.

Along with the Lukmanier Pass and the St. Gotthard Pass it can easily be incorporated into a convenient 97 mile loop that starts and finishes in Andermatt.