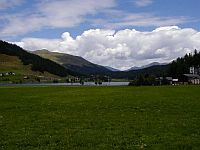 The Wolfgang Pass is an Alpine pass located in the canton of Graubünden in Switzerland. It connects Klosters and Davos and historically it was used as a trade route via the southern adjacent Scaletta Pass and later via the newly built Fluela Pass. The road can be closed in winter and motorists are forced to use the car shuttle train through the Vereina tunnel or drive a long detour via the Julier Pass.