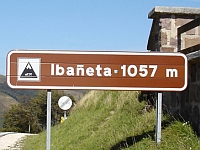 The Ibaneta is located in southwestern France near to Saint-Jean-Pied-de-Port, the customary starting point of the Camino de Santiago pilgrimage route – known in English as the Way of Saint James.

Lying between the towns of Luzaide/Valcarlos and Roncesvalles the pass itself is entirely in Spain and goes by several other names including the Roncesvalles Pass and the Roncevaux Pass.

Via the D933/N135 it serves as a link between Saint-Jean in France and Pamplona in Spain and the 47 miles between these two points is a really good biking road. Particularly the middle 30 mile section between Arneguy on the French-Spanish border and Zubiri in Spain.

Return to Santander and the ferry back home