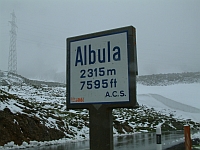 Leaving Tiefencastel the road follows the valley floor and the railway past Filisur to Bergun. From Bergun the road tightens and in some places the road surface is not the best, but the scenery is very good. Adding to the interest is observing the contortions of the railway in order to gain height. The gradient is so steep the railway does a series of loops, one past Bergun and three more near Naz. You can see a series of interconnecting viaducts. You lose sight of the railway past Preda as it enters a tunnel for the run down to the Engadine valley at Bever. Meanwhile you continue to climb until you exit the tree line and begin a fast run up to the summit. You then have a fast descent following the river until a final series of hairpins, none of them tight, bring you down to La Pont Chamues. A really nice pass.